“At every railway crossing in France there is a solid notice, a panel with writing on it which reads: ‘Attention! Un train peut en cacher un autre.’ Cartier-Bresson, whatever the event he was photographing, saw the second train and was usually able to include it within his frame. I don’t think he did this consciously, it was a gift which came to him, and he felt in the depths of his being that gifts should continually be passed on. He photographed the apparently unseen. And when it was there in his photos it was more than visible.

Yesterday he joined the second train. At the age of 95 – with all his agility – he jumped it. He has joined his inspiration. Six years ago he wrote something about inspiration: ‘In a world collapsing under the weight of the search for profit, invaded by the insatiable sirens of Techno-science and the greed of Power, by globalisation and the new forms of slavery – beyond all of this, friendship and love exist.’ He wrote this in his own handwriting, which was open like a lens which has no shutter.

Bullshit! I now hear him saying, look at my drawings, there is no second train in them! So I look at some reproductions of some of his drawings. How drawings change – even 24 hours after a death; their tentativeness disappears, they become final. He said repeatedly in his later years that photography no longer interested him as much as drawing. Drawing – or anyway drawing as he drew – has less to do with the sense of sight than with the sense of touch, with touching the substance and energy of things, with touching the enigma of life without thinking about eternity or the second train. Drawing is a private act. Yet Cartier-Bresson returned to it, knowing very well that it was an act of solidarity with both those who see the second train and those who don’t……” (Link) 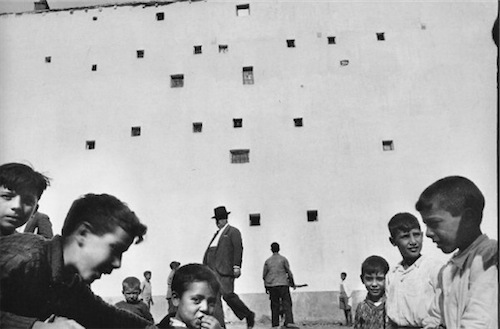